A last minute cancellation from our female team-mate Caryn had me scrambling at the last minute to find a replacement - though we did have an alternate plan - Jim and I could race as a 2 person male team. Luckily Caryn's sister - Jeanette was free and one more call finished out the team with Jim Gorton, Jeanette Ciesla, and Erik Wise - a solid team.

We headed out from Deland just before 5 AM and Erik was driving behind me about 30 minutes into the drive when he realized he had left his gear bin. Not a problem, between Jim and I we were able to get all the mandatory gear necessary from just the spare stuff we carry - so we were on time and I was able to start on the maps just after 6 AM. It was cold - around 36 degrees at the start with that biting humidity that seems to make the cold in Florida burrow into your bones. Still we had work to do and we got it done - and were ready for the 8 AM start.

The race started with a roughly 2 mile run to 2 CP's to break the teams up before we headed out on the bikes for The paddle. There were about 5 teams heading out at the same time on the bike leg, a fast transition had us 3rd out the door but within seconds of the other top teams.

There were 5 checkpoints on the bike section which you could get on the way to the paddle or on the way back. There was a pretty logical north route and south route - and the teams likely split 50/50 between the 2 routes. We chose the south route and even chose to go a little farther to stay on the gravel road. We arrive at the paddle TA just as Good'Nuff was dropping their boat in the water. We chose to portage directly to CP8 - and so did Super Frogs who arrive at the boat TA about 30 seconds behind us. CP8 and CP9 were in a small channel with some of the nastiest water I think I have ever seen. Both Super Frogs and our team headed out into Lake Apopka and a pretty healthy headwind. The waves weren't too bad, but the wind was seriously cold and being just a little wet - it was pretty chilly. 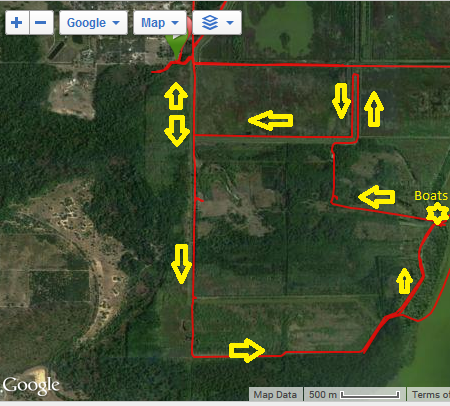 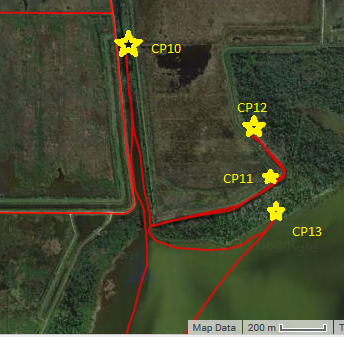 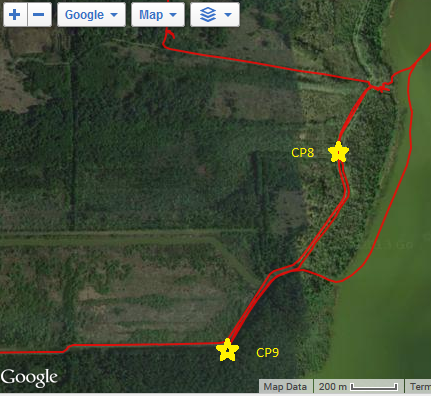 We paddle across to the canal entrance leading to CP10, CP11, and CP12. As we approached CP10 we passed a team that looked like they were wet and their middle paddler looked like she was shivering pretty bad. They had tipped their boat so they were all soaked - and with the cold wind they were not warming up. We saw them again at CP13 and Erik gave them his heavy rain jacket. We heard later that helped keep them in the race. On the way back across the lake I could get an idea of where we were relative to Super Frogs and I knew as we left the water they had gained a 6 minute lead. We completed the paddle in 1:39, respectable - but a bit slower than Super Frogs (1:31) and Good 'Nuff (1:35)

The ride back to the main TA was uneventful - controls were easy and it was warming up a bit.

We headed out on the second foot leg - which had no real navigation to speak of. It did require some route choices to avoid heavy vegetation.  We took this at a slow jog (43 min) - Good'Nuff showed how fast it could be done blasting through this in 32 minutes.

I had strongly suspected the O-Course would make or break the teams and also would be the most deciding segment of the course. We changed out of cold weather gear and took off on the bikes - I felt we were in striking distance of both teams in front of us - but were also keeping the team at a reasonable pace. After snagging CP18 - Jim announced that he had a flat tire - and it was really flat. We are pretty quick on tube changes and we blasted through this one in about 5 minutes and were back on bikes heading for the O Course picking up one more CP en route.

I was hoping for brutal (our strength) and was not disappointed. There were really no trails to speak of - so I had to use bearing and distance and the few clues I could gather from the aerial maps. 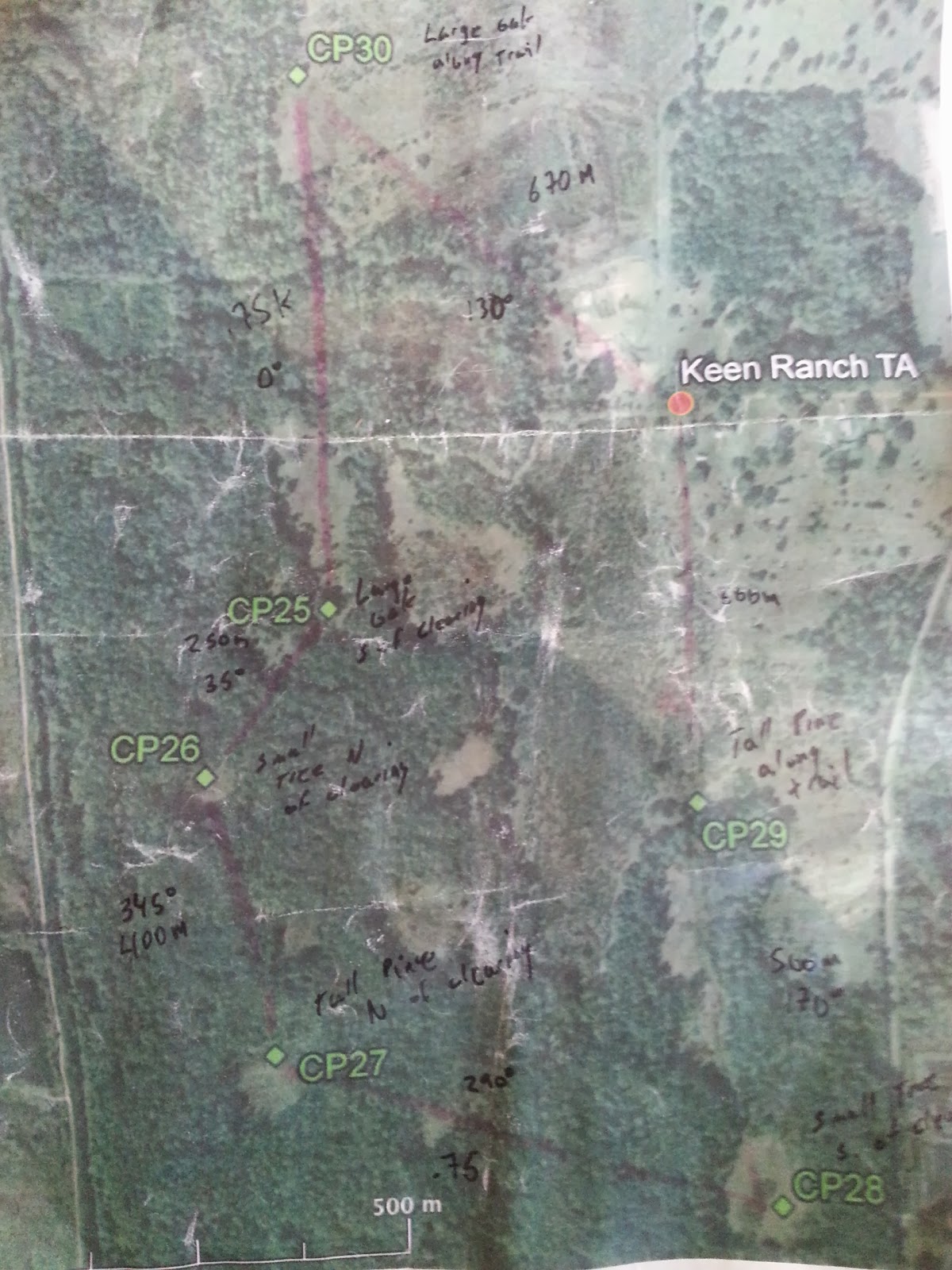 We bashed through and kept a pretty straight line - hitting each control pretty much dead on. 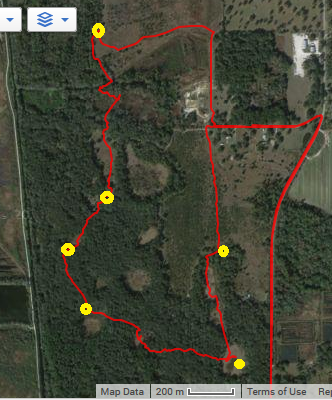 As soon as we got back from the O Courses we discovered that Jim had another flat. Luckily we had another tube but we were a bit slower in changing this tube. We had the longest bike of the race ahead of us - and though it looked like we would have a lot of fast riding I was not 100% sure what conditions we would face. As we approached CP21 we noticed that Jim's tire was low again and by the time we made it back to the berm road it was completely flat. We had passed Super Frogs on teh way to CP21 - they had taken a dead end route coming back from CP21 and their lead was about 8 minutes. It was about to get much longer - we were out of tubes and the only 26 inch tube we had was a Schrader (and Jim has Presta rims). After fiddling around with patching the existing tires - we finally stuffed my 29 inch Presta tube in his tire and headed out. We were now at least 20 minutes behind Super Frogs - with about 30-40 minutes of riding to go. We did not know where Good'Nuff was - but we knew there was a good chance they were close to the Frogs. 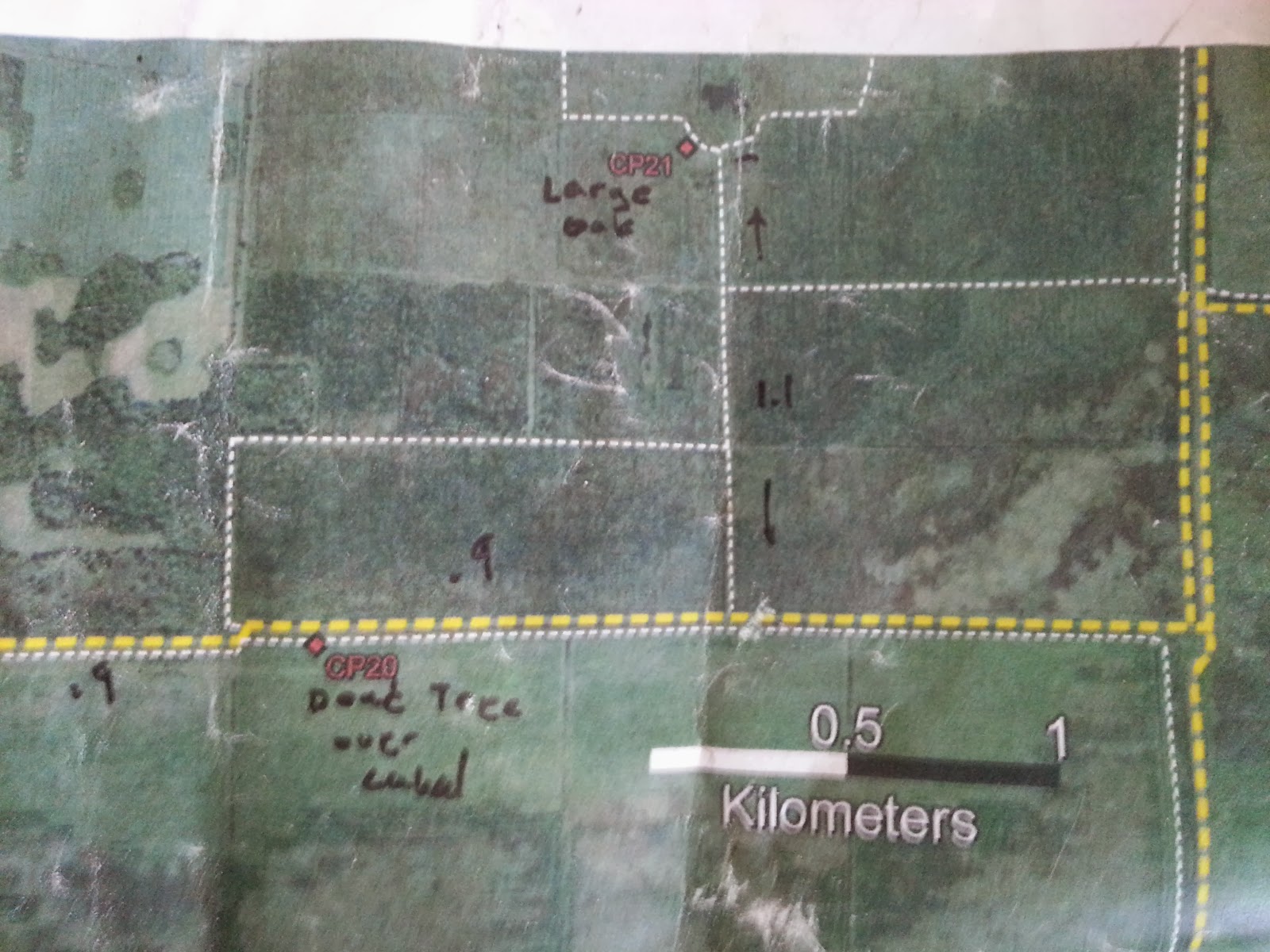 We came up on the wrong side of a dead end trail at CP24 but easily bashed through to the other side and it looked like a few other teams had done the same thing.

We arrived at the finish and did not see Good'Nuff, but JJ from Super Frogs was waiting for us. They had missed one CP and had gone back to get it. I felt for them - we made the exact same mistake at the Blue Springs race last year and it had bumped us 2 places. We were second - and a few minutes later Good'Nuff showed - not looking too happy about missing a CP, but in AR literally anything can happen (and usually does).

Results are available at http://pangeaadventureracing.com/event-details/events/2014-resolution-ar

Ron, thanks for helping us out by loaning the jacket. Ana was just about frozen solid. I don't know if we busted the zipper on it, but if so let me know and I will make it right. Good to meet you and your team. What a group of excellent people! 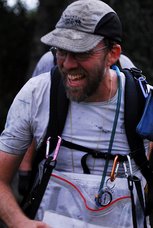